Essential – What You Need to Know About Electric Guitar Pickups

Believe it or not, there once was a time where electric guitars didn’t exist. Big band’ music was all the rage in the early-to-mid 1900s. The time bands truly lived up to the name more often than not. They were light by today’s standards! And with the majority of those band members being some horn player. There was a tendency to be many volumes onstage from various instruments.

And there lies the problem. The guitars of that era just weren’t loud enough to be heard in such a large mix. Acoustic guitars do have a fair amount of volume, but the signature tone that a good acoustic has just wasn’t the right fit for a jazzier setting. Archtop hollow-body guitars were better, but many guitarists still struggled to be heard. 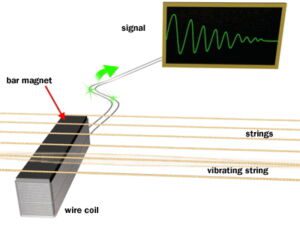 With the advent of the electric guitar, all of that changed forever. Now any player could get an amp plugin and never again have the problem of not projecting enough. The key to this miracle was a device called the pickup.

But what exactly are pickups, and how do electric-guitar pickups work? On top of that, there seem to be several different kinds. So which ones would be the best for the type of music you prefer to play?

No need to ask – we’ve got it covered! Let’s take a few minutes and take a look at these marvels that have taken the guitar from a backing instrument into a bonafide force to be reckoned with!

What are electric guitar pickups?

Anyone who has ever looked at an electric guitar has seen one (or several) pickups. These look like little blocks of plastic or metal mounted under the strings in the picking hand’s general area.

“Sometimes the nicest thing to do with a guitar is just look at it.” Thom Yorke

Electric guitar pickups work without getting super technical; they take a thin copper wire and wrap it around a magnet. This creates a magnetic field where anything that vibrates close is picked up. That energy is turned into an electronic signal. The wires coming out of the pickup are then routed to the volume and tone controls on the guitar itself, then to the output jack.

From there, an instrument cable is run into a guitar amp (or, in this day and age, any one of several preamp devices that can be routed directly to a PA or recording device). Voila! Your playing can now be heard at just about any volume you wish!

(Yeah, sometimes know the ‘volume you wish’ is enough to shake the paint of the walls. However, you have to keep your relationship with the neighbors in mind, right?!?)

What are the different kinds of pickups?

Two main pickups are single coils and humbucking (also called ‘humbuckers’). While the basic overall idea and theory of how they work are the same, some inherent differences definitely can make one type a better choice over the other, given what you’re looking to achieve.

Single coil pickups are the most basic type. The wire creates the ‘coil’ that wraps around the magnetic core. In some single-coil pickup designs, the magnet is a single bar; in many cases, there are also individual pieces of metal called ‘pole pieces’ that help direct the magnetic field.

With this design, there is one pole piece for each string. The pickup design can often be raised or lowered to be set closer (or farther) away to balance the individual string volume. It’s also often widespread to find pole pieces with a fixed height. However, some may be taller than others to help get the right mix between all the strings to keep things even (i.e., not too much treble or boomy bass).

The guitars that come to mind for most guitarists when discussing single coils are the iconic Fender Stratocaster and the Fender Telecaster. The Stratocaster has three single coils with a multi-position pickup selector switch to get a wide range of sounds. The Telecaster has only two single coils, but the sound typically has a little less high-end with more midrange bite.

Single coils are the go-to choice for that twangy country sound that is a hallmark of the genre. They are also a popular choice for blues players due to their clarity and presence. Even when they have the thicker sound you get when placed closer to the neck, this is true. Don’t kid yourself, though – plenty of rock players have used single coils in ways that early electric guitar manufacturers would have never imagined!

While single coils can be a great choice, they have drawbacks. Yes, they can tend to be snappy, but sometimes they can have a little too much high-end to get the job done. Another issue is that they are notorious for picking up hum and buzz, which can be annoying.

Humbucking pickups were explicitly invented to counter the effects of both these issues. A humbucker is constructed by essentially mounting two single coils next to each other and then wiring them together in a way where the hum gets canceled out. On top of that, a humbucker tends to be much warmer in tone than a single coil.

As with single coils, most humbuckers come with pole pieces as well. A typical configuration is for one coil to have fixed poles, while the other comes with adjustable ones.

Because of these features, humbuckers are featured in rock guitar standards such as the Gibson Les Paul and the SG. There’s a reason why you’ve seen these guitars in the hands of so many rock players. The humbucking design is often just the right choice for the higher volume and gains tones needed.

Without the invention of the pickup, the guitar would not nearly be as prominent of an instrument in popular music as it has been for the past half-century or so. Some genres (such as rock and metal) would probably not even exist with the power that can come from a high output humbucker run into a cranked tube amp.

While we mentioned a few examples of guitar models that typically have single-coil or humbucking pickups loaded into them, however, they are by no means the only ones out there on the market. We’d encourage you to give several models with different pickup types and configurations a try. It’s worth the effort for you to find the perfect complement for all that you want your tone to be.