This is a guitar solos tutorial for intermediate to advanced guitar players.

Let’s deal with a hypothetical for the sake of this tutorial. Your playing over an unusual chord progression, you notice a chord that sounds, let’s say, “off.” How would you go about correcting the situation?

Diatonic chord progressions are commonly used in most pop songs and rock and blues. Every major or minor scale has seven diatonic chords corresponding to each scale’s intervals.

In the “Guitar solos over chord changes” video, I provided a backing track for the lead guitar part I played. Note that the track is in the key of A minor.

The A minor key diatonic chords are:

The backing track in the key of A minor has the following chords. 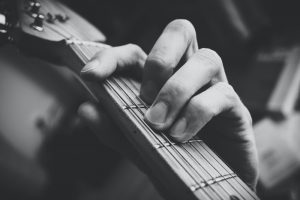 Remembering our music theory, as you can see, the V chord is not E minor but E major. This means that this chord is the “one-off” to which we should pay attention when playing over it. Also, the notation is noted with a capital V, meaning it’s a major chord.

The same thing applies to the IV chord, an A major chord.

While watching the video, hopefully, you will notice that the melody changes to the usual A minor pentatonic when these chords are played.

Also, you may have already concluded these chords as modes. Note: Modes are inversions of a scale.

How to play your guitar solo over non-diatonic chords?

Tip: If you want to create an exciting solo, pick chords from the progression to solo over.

Jamming over three chords in blues or four common power chords is cool and gives excellent results. Consider how most blues or legendary rock progressions solo over 3 or 4 simple chords.

However, it’s worthwhile knowing how to spice things up by enhancing your melody.

Blend the pentatonic with chord tones

You might have noticed that I mostly use the A minor pentatonic scale for most of my licks in the video.

A good tactic is to stick with the pentatonic most of the time, then drift off to one of the chord tones of the “unexpected” chords when they happen.

For example, when the D major is played, I usually play the third interval of the D major chord in the 7th fret of the B string and on the 14 frets of the high E string.

If you want to go for a melodic solo, the ” third” is always a good choice! However, don’t get too bogged down with the mechanics of chord tones.

Learning triads all over the Fretboard is very helpful for the following chords.

I relied on E major triad every time the E major chord hits in the demonstration. I have used an E major triad while the chord is playing, strengthening the impact of the “unusual” chord.

Also, it gives the freedom to break out of chord shapes and land on any chord tone everywhere on the Fretboard.

Sometimes it’s best not to overthink and let your ear do the playing.

“Unexpected Chords “s are often easier to find by using your ears rather than by trying to find them using your hands on the guitar neck. You can prove this to yourself by singing over any backing track.

Try the following whenever you find playing over a chord progression. Leave the guitar and sing melodies while listening to the passage. If you can’t sing, just hum.

It’s essential to find the notes first and then translate them to guitar.

Modes are intricate for guitar players, and their usage is somehow misunderstood. If you know how modes work and when to use them, you can rely on them whenever the chord progression suits that mode.

An excellent example of that is the A minor to D major chord change in the backing track of the demonstration. A minor scale with a sixth major interval is a Dorian scale. The major sixth interval in the Am scale is the F#, which also happens to be the major 3rd interval of the D major chord.

If this feels complex to you, do not worry too much. The result you achieve can be the same modes or not. I do not think in modes and might be thinking about them after improvising over the track.

There are no hard and fast rules when playing your guitar solo over chord changes. Don’t overthink it. You could be doing a great job at it and perhaps not even realize it.

Relying on theory, shapes, or consciously on your ears is an excellent way never to get stuck while soloing. No matter how hard the chord progression seems. If you can’t right away, jam over it, take it easy, and analyze each chord at a time.

When learning a new guitar technique for the guitar—practice diligently.

One last tip is to record your playing; leave it until the next day or so. Then listen to the recording with a rested mind.

About the Author: Altin Gjoni

Team member Altin Gjoni is a professional session guitarist. He is in his element when he is writing and pursuing his love for guitar and recording. He is now ramping up his time in the studio recording multiple genres from pop to metal and his favorite genre, progressive rock.