How to Read Guitar Chord Charts

Learning how read guitar chord charts is a skill that is critical for any guitar player to succeed. Chords, along with scales, lay the foundation for every song ever written.

I’ve got 50 different tunings in the guitar.” Joni Mitchell

That’s more of a ‘music theory’ discussion. It’s probably best to leave that for a later date when we can do a deeper dive into it.

How to read guitar chord charts

There’s no doubt that, as you’re learning to play. You’ll come across some graphic diagrams that look similar to the ones below:

Yeah…we know. They look like bingo cards..but they aren’t.

Let’s look at what it all means for playing open chords first. Then we’ll get into some of the differences using the barre method.

Using another example again below. This chord chart format shows ‘open’ chords. Open chords are nothing more than those with open strings mixed with fretted notes.

Usually, open chords are played within the first four or five frets. That’s the main reason why the horizontal line at the top of the chart is much thicker than the others. Instead of a fret, that line represents the actual nut of the guitar. 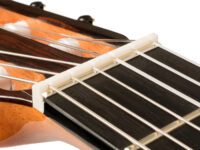 If you read the chord chart correctly, playing an open D chord will be as follows:

The mechanics of how a chord chart works are the same, between a diagram for an open chord and a chart for a barre chord. There are a few minor differences to keep in mind, however.

We are looking at our barre chord chart example below. You’ll notice that it says ‘5’ on the left side near the top of the chart since barre chords are, for the most part, yet again a topic for another discussion. Movable chord forms, that top line represents a fret higher up on the neck than the guitar nut.

That’s all there is to it!

There’s no complicated music theory to learn – chord charts are a simple way to quickly understand how to play almost any chord type that you’ll come across. Furthermore, we do have to say that even though chord charts are the ultimate in simplicity, there is excellent value in understanding the music theory components behind each chord. However, as a beginner – that kind of knowledge can come later.

Getting a handle on a useful chord vocabulary at the start will help you progress faster in your playing. If there’s one thing we know about learning to play the guitar, it’s that celebrating the little victories (like learning to play your first few chords) keeps you motivated and inspires you to learn more and more as your skill sets develop.