Tips – How a Capo Can Change the Way You Sound

The more you play the guitar, the more you should become familiar with some of the finer aspects of music theory. Yes, we know just the mention of the term can strike fear into the hearts of even the bravest musician. Nonetheless, things that may not have made much sense at the start may be starting to sink in a little bit after some time.

One of these concepts is the key to a song. So what are you supposed to do if you want to play a song in, for example, the key of Eb? The last we knew, there were no open chords that fit the bill, and let’s face it – playing barre chords (and playing them the right way) isn’t necessarily the easiest thing to do, particularly for a beginner.

Not only that, but sometimes the key of a song is just wrong for what the range of your voice can handle. It’s not uncommon to change keys to get things comfortable vocally to hit all of the notes. So then what?

The answer to all of this is pretty simple – use a capo.

Today we’ll be taking a look at what a capo is, how it works, and some tips to use them correctly.

What is a capo?

A capo is a small device that acts as a ‘movable nut’ on your guitar neck. It wraps around the neck in-between two frets and, out of those two frets, makes the one closest to the bridge act as the nut.

Guess what? You now will be playing an Eb chord instead of a D!

To note, it’s often cited in guitar tab and chord charts when to use a capo as ‘Capo X’ where ‘X’ means the fret that’s, again, closest to the bridge. So in our example above, that would be ‘Capo 1’ since the capo would be positioned between the nut and the first fret.

Let’s take things a step further: place the capo at Capo 2 (it should be located between the 1st and 2nd frets). Play that same open D chord, and you now have an E chord.

Do you see the possibilities here? Playing a song on the acoustic may often mean playing some fingerpicking with open chords to let the notes ring out to get a more lush sound. With a capo, that’s no longer an issue regardless of the key. And if you do have to change keys to be able to sing? No problem – move the capo to where you need it to be to get the key in your vocal ‘sweet spot.’

Now that we know what a capo is and the theory of how it works. Let’s look at a few tips to get the most out of using one.

Using a capo in the right way doesn’t mean just slapping in between two frets; if you do it the wrong way, you’re asking for issues.

A good reference point is the frets themselves – always install the capo parallel to them. Putting it on crooked can keep some open strings from ringing out as they should. However, it also may crowd your fingers a bit if you are playing chords down by where you have it placed.

Sure, things can get tight the higher up the neck you go. Songs like ‘Here Comes The Sun’ (The Beatles) and ‘Hotel California’ (The Eagles) both use a capo at the 7th fret so that it can be done (and done very well, we might add).

Too much (or too little) tension

Most modern capo designs are spring-loaded, so they do not move on the neck after you put them on. That’s a good thing. Except when it’s not!

Some basic capos have pretty strong springs. They can have the effect of actually making your guitar strings go sharp. The other side of the coin can also be an issue – too little tension can leave your open strings muted.

Sure, you can get around this by re-tuning your guitar, but that can be a real pain to have to tune it again once you take the capo off. This effect can be even more drastic if you use a capo on an electric guitar where the strings are typically a lot thinner.

The answer here is investing in a capo with adjustable spring tension. These kinds of capos have small knobs where you can quickly increase (or decrease) the tension to get it exactly where you need it. They may cost a few dollars more, but it’s worth it.

Remember not to forget you’re using a capo.

Well. Yeah. Of course, you’re using a guitar capo. That should be pretty obvious, right??

“What I do now is all my dad’s fault, because he bought me a guitar as a boy, for no apparent reason.” Rod Stewart 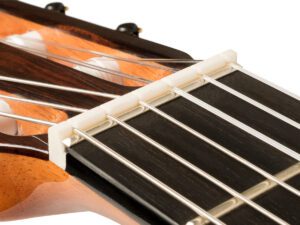 A simple example is this: let’s say you were playing a song in the key of E. Let’s say that the chords are E, C#m, A, and B. The way the song is constructed, you may find it would sound better by using a capo on the 2nd fret (Capo 2).

So instead of the typical chord fingerings, you would typically use without a capo. You’ll now be using a D shape for the E, a G shape for the A, and an A shape for the B (all open chords).

The C#m still has to be a barre chord (ugh). Make sure not to play it up to four frets from the capo. Just like you would play a C#m on the 4th fret without a capo. The trick here is that since there are no open strings in a C#m barre chord. However, you still have to play it at the 4th fret to get the right pitch.

Yes, they may sound a bit confusing, but if you sit down with your guitar and think about it. You’ll quickly see exactly what we are referring to. It can be a bit of mind-blower if you are using a capo ‘on the fly. However, you’ll grasp the concept with a little bit of practice.

And – isn’t a little bit of practice’ the answer to conquering most things on the guitar?

A capo is a great device that can easily and inexpensively enhance your playing and increase your options. Not only can it make playing a song in a different key more comfortable, but it also can take songs you already know and put a different harmonic spin on them by using different chord voicings that would be impossible to play without its help.

It’ll be time well spent to experiment with all that a capo can do. You may end up asking yourself how you ever played without one in the first place!