Chords are the backbone of pretty much every song that has ever been written. This is true no matter the genre of music or how complex the piece may be. For example, it’s not uncommon to find an old jazz standard that changes chords on almost every beat; simultaneously, ‘Tomorrow Never Knows by The Beatle’s is one single chord all the way through.

Several chords are found in numerous songs, and some are much more common than others. These combinations are called chord progressions and can be found on guitar chord charts; they are accessible to group chords in a specific key.

So what does it take to create a chord progression, and how are they notated? It may sound like the answers would involve a lot of music theory (which, for some guitar players, strikes fear in their hearts at the simple mention of the term). Yes – there is some theory involved, but no – it’s not all that complicated…

How to notate a chord progression 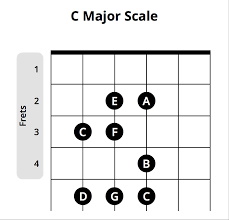 OK,  although this may be true, however, if a chord progression is just a bunch of chords thrown together, then what’s the big deal about knowing how to describe (or notate) them?

As your musical knowledge progresses, you may often run into situations where you are playing with other musicians, and they may say something like this:

This is where you might freeze up. I-IV-V? What the heck is THAT supposed to mean?!?

It’s pretty simple, really – a lot easier than you may think…

Another key point is to keep things simple. We’ll be dealing with C Major’s key for all of our examples. However, chord progressions can translate to any key (more on that later). If you take a look at the C Major scale, you’ll find eight notes:

Basic chords for this scale

FYI – How these chords are developed is a whole other topic that may be outside the scope of what we are looking at here – but it’s a topic that we will go over in future articles. We’ll move on for the sake of simplicity.

Moreover, the typical convention uses Roman numerals to classify each chord related to the scale degree. Given these points, that means the vocabulary for the chords in C Major is as follows:

Keeping that in mind, the I-IV-V chord progression that we mentioned earlier consists of C Major, F Major, and G Major. And yes – for all of this ‘music theory’ type stuff, it IS that easy!

Blues chord progression for the key of E

As an illustration, one thing that’s handy about chord progression notation is that it universally applies to any key. We mentioned the key of C above for the blues example…and while there are certainly blues tunes in the key of C, it’s much more common in the guitar world to have a blues be in the keys of E A.

Equally important, what would the I-IV-V blues chord progression be for the key of E? Remember that chord progression notation works the same no matter what key you’re in, so you can follow the same train of thought. Below is the E Major scale:

Here’s a little test for you (don’t worry – you won’t be graded on it!) What is the I-IV-V progression in the key of A Major? You’ve got the concept nailed if you said A Major, D Major, and E Major!

While technically, almost unlimited chord progressions can be created, some are used much more than others. Certain progressions have a specific sound or feeling of resolution to them where you may find yourself being able almost to guess what chord may be coming next if you’re trying to figure out a song just by listening to it.

We’ll now take a few minutes and go through some of the more popular progressions. We’ll also give a few examples of popular songs that use them for each one.

Yeah, indeed, we may have beaten this one to death so far, but with good reason – furthermore, an I-IV-V may be close to the most straightforward and widest used chord progression in popular music. As I have said, it’s very common to the blues, although you’ll also find it used in countless songs in other genres. Have you ever heard the term ‘three-chord song’? Well…here you go!

This chord progression throws in an extra chord, which helps create more dynamics and harmony within the song’s structure. In addition, it’s similar to the I-IV-V; you may be surprised at the number of pieces that use it.

Moreover, songs that use this progression are found far and wide across pop music and comprise some of the most popular tunes you may have heard:

If you’re a jazz enthusiast, then you may not be surprised that this is considered by many to be the most popular chord progression in the genre. Many jazz players have cut honed their chops on the countless standards used as the baseline for the song.

It sometimes maybe a little confusing to identify because jazz can sometimes be so harmonically complex, but the backbone is undoubtedly there.

Furthermore, some of the jazz tunes that use an ii-V-I progression (in at least one portion of the song) are below; most are classic standards recorded by numerous artists over the years:

Summing up, chord progressions are simply a group of chords in a commonly used key in a particular order within a song. However, countless ones can be used, but a select few are very common across several music genres. Notating them can be as simple as assigning a set of Roman numerals based on the scale degrees in the key you are working in.

In conclusion, having an overall knowledge of how some of the most popular progressions work can help you quickly learn a wide range of songs. Secondly, taking a few minutes to understand the concept will be time well spent.