It goes without saying, but over the years, Fender has produced some fantastic and iconic guitars. They also have a long history of creating guitar amplifiers in that same light, which are just as highly regarded. The Fender Deluxe Reverb 65 Reissue is a perfect example of something ‘being so nice. It only makes sense to do it twice’…

The Fender ’65 Deluxe Reverb (DRRI for short) is a faithful reproduction of an amp that has long been the go-to source for countless guitar players over the last 50+ years. Part of what has made it so attractive is the overall physical design. The DRRI is a mid-sized combo amp with 17.5″ x 24.5″ x 9.5″ and 42 lbs total package size.

That keeps it in the ‘manageable’ range of portability, making the DRRI an excellent choice for a gigging amp. If you have ever tried to move a full-blown Fender Twin Reverb or any tube head/stack combo in and out of venues, then you’ll know exactly what we are talking about. 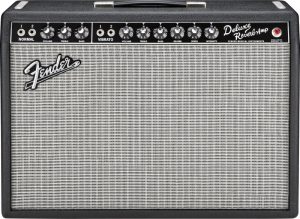 The DRRI is a two-channel amp that features a tube preamp and power sections (coming in at 22 watts) and a single 12″ Jensen C-12K speaker while also sporting tube-driven reverb and vibrato effects (the vibrato is accessed through the second channel). It comes with a two-button footswitch (reverb on/off and vibrato on/off) along with a Fender-branded dust cover as well.

Controls on the DRRI aren’t different at all from the original. Features four ¼ inputs (two for each channel) and separate tone stack sections (volume, treble, and bass). A single knob controls the reverb level, and the vibrato can be shaped with the Dual Speed and Intensity knob configuration.

Compared to some of today’s modern amps, it’s decidedly low-tech. But hey – that’s not always a bad thing. That being said, if you are looking for any USB/Bluetooth capability, then you are indeed looking at the wrong amp. None of those modern bells and whistles are found within a mile on the DRRI.

So yeah – the DRRI is decidedly an ‘old school’ amp, entirely as intended. So what does that mean? It means that the DRRI is a fantastic sounding amp, that’s what! Fender amps have long been coveted for their pristine clean tones. This model certainly doesn’t disappoint in that department.

Simply put, it can be set up to chime like a bell. At the same time, that is great if your playing style is primarily clean. What about if you’re the type that likes to have a little (or a lot) dirt on your tone? The DRRI suffers from the same problem.

Many older tube amps without dedicated drive circuits have – to get the amp to break up. You have to crank the volume. And we don’t mean just a little bit.

We are talking ‘tick off the neighbors’ kind of sound levels. These amps have a ton of clean headroom. While you can get them into the glorious tube-breakup mode, it’s just not that convenient or practical. To that end, we would recommend finding a good-quality overdrive or distortion pedal that suits your tastes.

It’ll still sound great, but it’ll do so at volumes that won’t get the police called on you in the middle of the night.

Overall, the Fender ’65 Deluxe Reverb Reissue is an almost spot-on replica of a time-honored classic amp. It’s flexible for numerous musical styles (with some added pedals) along with being relatively easy to transport for a tube combo amp – making it an excellent choice for playing out in live environments.

One thing we should point out, though – it’s not cheap. With a current MSRP of close to $1,200, it lands solidly in most tube amps’ mid to upper range.

But, as the old saying goes, you do often get what you pay for, and you may find – along with numerous other guitarists – that the DRRI is worth every penny.