George Harrison, guitarist, singer, songwriter, is best known as the former lead guitarist for the Beatles and co-founder of the Travelling Wilburys. George and his wife Olivia Arias Harrison and their son Dhani designed a house to build on Hamilton Island in the Whitsunday Islands, Queensland, Australia, in 1987.

When George was with the Beatles, he fulfilled many of his dreams; however, being a Beatle during Beatlemania profoundly affected George.

Imagine a life where you lose all your privacy entirely, regardless of where you went. During the peak of Beatlemania, the Beatles collectively endured constant screaming day and night where ever they went.

We can only try to imagine what it was like for them, living their life while contending with fans who were constantly trying to get to them in any way they could.

Their Producer, George Martin, reportedly said, “no one except those boys knows what they went through.”

Fans left no stone unturned in their quest to get to any of the Beatles. The band had to endure constant screaming and sometimes invasive actions by some fans who were always clamoring to catch a glimpse of them, often using extreme and underhanded methods in some cases.

Further to all the madness, sadly, there were even some death threats. All four Beatles were more than aware that they were at risk of being killed by some crazed person. While the whole experience affected all of them, it profoundly affected George; for him, it was overwhelming.

The whole experience affected George profoundly; it was overwhelming, and something very few have known the likes off.

He hated being famous

In time, George realized that fame was is not what it’s cracked up to be. George wanted to become infamous; he wanted ordinary everyday people’s freedoms. Furthermore, he sought an escape, somewhere away from all the madness that had changed his life.

Olivia Harrison reportedly said that “George was always on a quest to get as far away as he could.”

George was on a mission to find peace and tranquility in his life after the mayhem and loss of privacy he and his other bandmates experienced in their time with the Beatles.

In 1987 George and his wife Olivia Arias Harrison and their son Dhani designed a house on Hamilton Island in the Whitsunday Islands, Queensland, Australia.

George has owned many other homes in England and around the world. He owned houses in Hawaii, Los Angeles, and a gorgeous estate in Switzerland where he received treatment for cancer. His last home was Friar Park in the UK, which his wife and son Dani still occupy.

Olivia Harrison reportedly said that “We found Hawaii and built a house there. But he wanted to keep going. We went to Tasmania, New Zealand, Australia. I had the feeling that he maxed the planet out, looking for solitude. It was about How far away can I get?’ “ 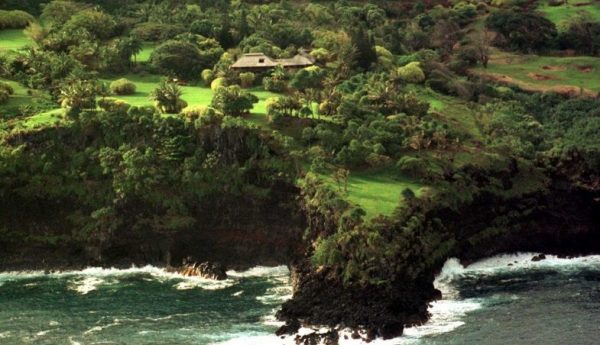 A desire to live tropical

However, George wanted to live somewhere far away and where there was lots of sunshine, that was his mission. Like the other Beatles, George came from Liverpool, England, with cold and frosty winters and inclement weather. He wanted to live someplace warm and tropical, very far away.

Olivia Harrison reportedly said that “Our final visit to Letsbeavenue was in the year 2000,” “It was the last of our big journeys together, before an even bigger journey for George.”

George was very keen to live in a tropical island setting. Perhaps his father’s stories told to George when he was a sailor might have influenced his taste for sunny tropical locations. His father would often talk about the green tropical places he saw in the Pacific ocean during his time as a sailor.

Olivia Harrison reportedly said that “The huts were to the right and the main house on the left. The living room featured a tree trunk that George found on the island.

View over the pool to the ocean

While in Hawaii during the early 1980s, British racing driver Sir Jackie Stewart, an old friend of George. Jackie asked George to come to Australia for the Australian Grand Prix. Jackie knew of the island’s existence and made George aware of it.

Hamilton Island was in a very early stage of development when the Harrisons first went there. They shared the island with many other wild creatures.

George Harrison reportedly said that” At times like being in a zoo, except we were the ones in the cage because we’d see monitor lizards, kookaburras, wallabies, and snakes at the windows looking in at us.”

There was only one bungalow on the whole island when they first went there in 1997. However, the island was beautifully pristine, just what George wanted. The Harrisons purchased a six-acre lot placed high on a cliff. There, they built their private tropical sanctuary over the next four years.

However, for George, it was ideal at the time, and he truly loved being there. George still had many fond memories of Australia from when he toured there with the Beatles during the touring phase of their career.

The Harrisons house is in Melaleuca Drive, Hamilton Island. It was a long way from their Henley-on-Thames mansion in the UK., which was their principal residence at that time. By intention, George had a strong desire to get as far away as possible; Hamilton Island fulfilled that desire.

Olivia Harrison reportedly said, “He used to go around the island, nicking plants for our garden. He’d even take big trees and replant them, ” said Olivia. George said, “I want it to be a jungle.” in time, a great deal of foliage had obscured most of the property.

According to his wife Olivia, George sketched his ideas for the house and gave them to Roger Parkin, an architect. However, it was Parkin who, together with George, designed the house. Part of Georges’s brief was to ensure that the home could cater to visiting family and friends.

“I’m really quite simple. I plant flowers and watch them grow… I stay at home and watch the river flow.” George Harrison

The home’s design is in keeping with its surroundings, just as George and Olivia had intended.

Olivia Harrison reportedly said that “George loved the South Pacific look, says Olivia Harrison. “He wanted the house to look natural, to fit in with the island landscape.

The house boasts beautiful sweeping views, rambling gardens, and timber finishes. The three guest huts are constructed from bamboo and indigenous materials. The home also features an organically shaped pool that is fed with waterfalls. 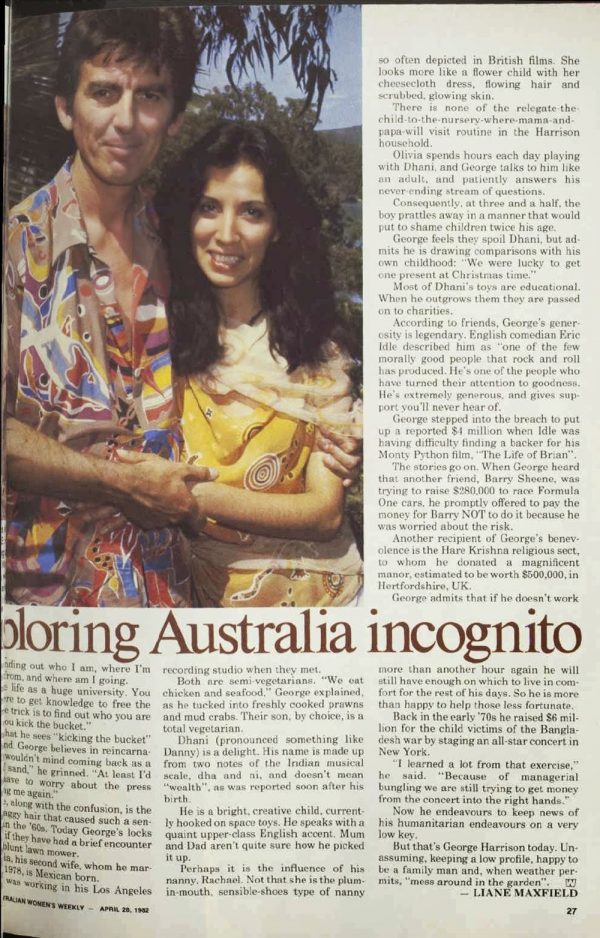 George named the South Pacific-Style home “Letsbeavenue.” The name was reportedly derived from a line used by the British comedian Tommy Cooper “Let’s be havin’ you.”

Olivia Harrison reportedly said, “George was a Pisces, so he liked to have water around.”

The house was sold to Melbourne developer George Adams for 8 million, a record price. The house had deteriorated into disrepair after Georges’s death from lung cancer in 2001. A great deal of foliage had obscured most of the property in time.

Olivia Harrison reportedly said, “We swam a lot in the natural ponds in Hawaii and tried to create that feeling.” “the pool comes into the house, and there’s a walkway over it. He always wanted to walk on water, so walking over the water was the next best thing,”

Other famous people who have visited Hamilton Island

Oprah Winfrey – Other celebrities who have been to Hamilton Island

To sum up, the house is only slightly visible from a few vantage points. But, most importantly, If ever you visit the island and plan to see where the Harrisons once lived. Please be mindful that the house is now privately owned. Above all, the owners are very mindful of their privacy. If you do visit, please respect that privacy?

Qantas.com. (2018). 14 Things to do on Hamilton Island. [online] Available at: https://www.qantas.com/travelinsider/en/explore/australia/queensland/hamilton-island/things-to-do-on-hamilton-island.html [Accessed July 22. 2021].

About the Author: Peter

The site administrator for Guitar Advice, Pete has been playing guitars since childhood. He's into both electrics and acoustic but now prefers electric. He plays guitars most days and enjoys doing it more than ever. Reading and writing about guitars is what he loves to do.