Effects pedals are cool – we really don’t think that anyone can debate that statement! Since introducing the first effects pedals back in the 1960s, there has been a constant and ever-changing market and demand. Name one type of effect – just one, mind you – and there will be countless versions and models available from many different manufacturers,

Overall, that’s a good thing. Being able to enhance your sound not only makes playing guitar more fun, but it also can open up creative avenues that you may never have considered before.

While having a good number of guitar effects pedals can open up your sonic options, there are some aspects where having multiple effects pedals are not so cool.

But what are those issues? And how do you get around them?

Before we get into the details here, we’ll jump to the end of the book and offer this up: the answer may be to consider using one of the many multi-effects units out on the market today. But be forewarned – to some players, even mentioning the term ‘multi-effects’ can stir up some strong opinions on why they aren’t as good as ‘the real thing.’

“Every guitar I own gets used and has its purpose.” Mark Knopfler

We beg to differ! Today, we will examine the pros and cons of using a multi-effects unit over a traditional individual pedalboard setup. We encourage you to go into this with an open mind – you never know…you may find some inspiration to change your entire rig approach.

There isn’t any accurate comparison between individual effects pedals and multi-effects units. It all comes down to simple math – and once you do that math, you may be surprised.

To build a basic pedalboard, let’s assume that you will want to use each of the following effects:

That’s only seven different effects. It may not sound like much, but it can be an eye-opener to look at the actual cost of a setup like this. 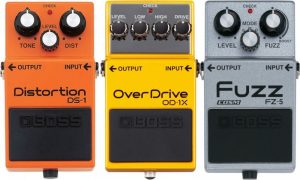 First off, you have to have something to mount all of these units. Sure, you can (as many players have) build your own out of a simple piece of wood, but if your budget allows, it may be a better answer to use a ready-made pedalboard.

Several manufacturers make them, and good models can run anywhere from the sub-$100 range to several hundred dollars based on the size and options available. Let’s say an average price for a decent starter pedalboard (with no case or power options) is around $100.

Then you need to factor in the pedals themselves; A word of caution here: there are plenty of cheap pedals on the market; while the price may be right, the quality level may not be up to par. However, suppose you are betting on your effects holding up for the long term of steady gigging or studio work.

In that case, we’d recommend spending a little extra upfront on getting some suitable quality units. We’ll baseline this around $100 a pedal, but there is a large market for boutique pedals as well. Some of these ‘higher end’ units can run several hundred dollars apiece – for one effect! 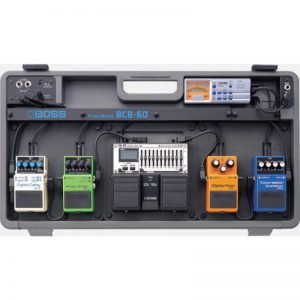 So you have a pedalboard…and you have pedals. Now all you need is a way to hook them all together to create your signal chain. That means purchasing multiple patch cords. A single cable typically isn’t that expensive (around $5-$10 apiece, depending on the quality), which can add up to an extra $50 just in cables.

The last piece of the puzzle is a way to power all of your little beauties. Trust us – the last thing you want to do is rely on 9V batteries when you have a functional pedalboard. You don’t need one going out on you during a gig, and the cost to replace them can add up to be a lot over time.

Here is a powerful solution that takes one wall plug with several branch cords (one for each pedal). This can run you an extra $30 or so up to (again) several hundred dollars for a full-blown power supply bank, so we’ll estimate $50 to keep things on the low end.

That alone adds up to $900 – and it’s for only seven effects. Think about what it would be if you wanted, for example, several types of distortion. Or two or three delays. Heaven forbid you to start adding other effects like reverbs…

By contrast, an excellent array of multi-effects pedals can house many times the same effects and cost less than half the price – and that’s for one of the more respectable, higher-end units. We don’t think there’s much of a con here as far as overall cost goes – the multi-effects win out in our eyes.

Real-life situation – one of our staff writers went to see his friend’s band play at a local gig. One of the guitar players got ZERO sound out of his amp as they set up. With only a few minutes before they were to go on, they started troubleshooting at a frantic pace to find the problem. And it all came down to – you guessed it – a lousy patch cord. And the guy didn’t carry a spare (shame on him). So he had to end up doing some quick reconfiguring and having to pick which effect to bypass to get through the gig.

With a multi-effects unit, you don’t have to worry about having numerous connections – everything is internal to the unit itself. Now that can be a good and a bad thing. It’s good in the sense that you don’t have to keep up with all of those patch cords, but it can be harmful in that if the unit malfunctions, you might be entirely out of luck.

It may go without saying, but most multi-effects units are reasonably compact. That means that they have crammed a lot of processing power into a bunch of chips on a circuit board. And that means one thing: most likely, all of the effects are digital.

That may not be all that big of a deal to some players’ ears. For example, digital delay pedals have been around for years. Once you get into other effects, though, the argument can be made that the sound quality may not be up to par with individual effects pedals.

The analog vs. digital debate often comes up, especially when distortion and overdrive pedals. These effects are notoriously difficult to capture using a digital model over a true-blue analog circuit. Overall we would recommend testing out any multi-effects units for the sound quality of the effects you plan to use to most. Some players go to the point of selecting analog effects on top of a small multi-effects unit to keep their sound expectations in check.

One of the most significant selling points in multi-effects units these days is the ability to have amp modeling included. Amp modeling is genuinely what the name implies: manufacturers create digital models that are meant to represent the output of a real amp, most times mimicking some of the most popular tube amps ever produced.

It’s a great way to experience the tone palettes you can get from having multiple amps at your disposal, but it’s not all sunshine and rainbows here. Upper-end units have highly developed algorithms to come pretty darn close to sounding like the real deal, but some of the multi-effects models on the lower end may lack authentic sound quality.

Technology is constantly evolving, though. While we are getting close to genuinely duplicating the sound of, for example, a cranked Marshall Plexi, to some, it’s ‘just not there yet.’ But for others, it’s close enough to do entire gigs or recording projects with no amp – at all.

So the key takeaway here is that YMMV. Some think that amp modeling is the greatest thing since canned beer, while others may think…not so much.

By contrast, a typical effects pedalboard is simply that – effects only. Yes, you can get individual pedals that do nothing but act as amp simulators. Still, they are usually limited in scope unless you plan to spend $500-plus for one of the several ‘mini all in one’ models that are out on the market today.

One of the things that many pedalboard enthusiasts get into is the whole process of creating a pedalboard. That means buying…selling…swapping…and getting into the nuances of making a solution that truly is all their own.

That isn’t much of an option with a multi-effects unit. Yes, you may have 100 different effects to choose from, but the unit you are looking to use may not have the latest and greatest one you want to try out.

For some, it’s not the kill – it’s the thrill of the chase!

So, in the end, are there enough pros to outweigh the cons of using a multi-effects unit over a traditional pedalboard? We would say…it all depends. The individual needs of each player need to be taken into account.

Some may have the budget and the desire to craft a custom effects solution that meets their exacting requirements. Others may be more than satisfied with getting the right quality multi-effects unit, which (usually) has more effects loaded into it than they would ever really use, anyway.

Cost, reliability, and sound quality are among the several things you need to keep in mind when making your choice. One significant point to make here as we sign off – whichever way you choose is the right way for you – there IS no right or wrong!