Since 1894, Gibson guitars has been revolutionizing musical instruments. That is to say, from the first archtop guitar to the first fully tuning Guitar.  Here are some of the incredible innovations that Gibson has introduced over the last 125 years.

The solid-body guitar was designed to increase the instrument’s sustain and produce a brilliant sound. Above all, it will also eliminate any feedback caused by the top vibrating. Furthermore, these guitar’s qualities are enhanced by using z type of wood with a high density, such as Maple.

The semi-hollow body guitar was invented to combine the sustain and resistance to the feedback of a solid-body guitar. Furthermore, it has the lightweight and comfortable feel of Gibson’s popular Thinline series of electrics.

This was accomplished by building the body around a center block of solid Maple. In addition, the maple block allows the bridge, tailpiece, and pickups to be suitable mounted.

The pressed laminated Maple for the top, back, and rims also helped suppress feedback. Furthermore, it provides an even, balanced tone that makes the semi-hollow-body guitars reputation as a versatile instrument. Indeed, it’s ideal for playing at home or on stage. It’s perfect for all music genres.

Mahogany and Maple are time-proven materials for guitar necks. Similarly, the necks of most Gibson models are constructed of a single piece of either material.

Mahogany is most commonly used because it produces a warmer tone. Maple constructed necks are very stable and have a brighter tone.

Fingerboards (fretboards) can be Richlite, Rosewood, or Paul Fero.

Humbucking (Double coil) Most Gibson electric guitars have double-coil Humbucking pickups. They were designed to do what their names say, “buck,” the hum. The hum is caused by fluorescent lights, rheostats, and other electrical interference. Furthermore, they accomplish this with two wire coils. The coils are wound in opposite directions, to cancel any interference.

Humbucking pickups produce a powerful sound that is the foundation of Rock and Roll music. Gibson makes Humbuckers in various subtle variations. They were achieved this by using different magnets and different combinations of winding turns.

In addition, some guitars have Humbuckers without the metal cover pieces, which results in a hotter signal.

Some Les Paul Juniors, Les paul Specials, and Melody makers utilize single-coil P-90 pickups. Some have the original ‘dog-eared’ covers; those without the ‘dog-ears’ are nicknamed ‘soap bar because of the actual cream-colored plastic colors. The pickups on the 1952 Les Paul Model are known to resemble bars of soap.

Several ES models have single-coil P-90 pickups with ‘dog ear ‘ covers. ES guitars with P-90s were used on many classic rock and British invasion recordings. In addition, the P-90s used on Memphis guitars have been designed to enhance the sound of ES model guitars.

When the P-90s were introduced in 1946, it was the most potent pickup of its kind; they still are now. Some of the many examples of the P-90 sound are Carlos Santanas Les Paul Special on Santanas classic recordings. Furthermore, Leslies Wests Les Paul Junior with the group Mountain and the Who’s Pete Townsend with an SG Special on Live at Leeds and Woodstock.

Although the pickups on each Gibson electric guitar are set to Gibson standards at the factory, they can be adjusted. Two screws can be found at either end of the pickup in the mounting ring, which allows you to adjust the pickup height.

Individual string volume can be set by turning the polepiece screws as required. Also, adjusting the pickup or pole screw closer to the strings makes the signal stronger or ‘hotter.’

Standard Gibson electric guitar configuration is typically two pickups, four knobs, and a switch for the pickups. Also, the four knobs provide individual tone and volume control for each pickup.

Models with only three knobs provide separate volume and master tone control. Furthermore, single pickup models have only two knobs for volume and tone control. In this case, there is no pickup selector at all.

Note, The middle and back pickup together (middle position) and the back pickup.

ABR-1 Bridge – ABR-1 stands for adjustable bridge 1. It was the original Tune-o-Matic bridge first introduced by Gibson in 1943.

It was different from the version of the bridge introduced in 1975 in that the body was narrower. Furthermore, the thumbwheels turned on bridge posts threaded into the body. The saddles could be easily removed and reversed if necessary to set the intonation precisely.

The thumbwheels and the string length adjust the height by moving the saddle back and forth by turning the adjustment screw with a flat head screwdriver.

The Gibson Tune-O-Matic bridge adjusts overall bridge height and individual string length. Also, the height is adjustable up and down. This is achieved by utilizing thumbwheels found under the bridge at both ends. Each string saddle can be adjusted forward and back with a small screwdriver.

Any shift in bridge height, string gauge, or climate can affect intonation. It might cause the guitar to become out of tune in some of the fret positions.

When this happens, the string length will need to be adjusted also. This can be accomplished by moving the individual saddles forward towards the neck or backward towards the tailpiece.

Note: the screw heads are on the pickup side of the bridge. However, there are many Gibsons that have screw heads facing the tailpiece.

To check the intonation, compare the pitch of a string fretted at the 12th fret against the Hamonic. This can be done by touching the string lightly with the left hand without pressing down onto the fret.

The stop bar tailpiece may be adjusted either up or down to alter the downward pressure over the bridge. There shouldn’t be a need to adjust the stop bar unless the strings move out of the saddles. In which case, the stop bar should be lowered.

If your guitar features the push/pull pot on either the volume or tone pot, if you pull the pot up and it clicks. This feature is designed to turn one pickup coil off in most cases.

This will result in a single coil sound, which may be desirable for specific songs or achieve different tones. Please note that it might be more susceptible to outside noise interference in this mode.

This is the ultimate divebomb tremolos and is used for many different styles. Restringing your guitar, it is best to cut the ball end off, Then loosen the string clamp, insert it into the clamp, and then retighten.

Suppose your Gibson is equipped with a Tone Pro Bridge. You will notice a small Allen screw in the side of the bridge base that allows you to lock it to the thumbwheel. This will result in a tighter fit and better tonal transfer. Loosen these Allen keys if you want to raise or lower the action.

If your Gibson has this feature when changing strings. Firstly, loosen the wheel on the back of the headstock, insert the string pull it as tight as possible. Then retighten the wheel. This tuner does not require you to tie the string up and should only need one wrap around the post at most.

Some ES model guitars are equipped with tailpiece studs that lock the stop bar for better tonal transfer and tuning stability. They have a unique cap with a hole in the middle for a 1/8′ Allen wrench.

To raise or lower the tailpiece, you must unlock the cap using a stop bar adjustment tool or flat blade screwdriver. Furthermore, you can increase or reduce the tailpiece studs using the Allen wrench when the cap is loosened. When the correct height is achieved, lock the cap back down.

1894 – Gibson builds the first-ever archtop guitar, using techniques previously used on only violins. In addition, the archtop design changed the music industry. It’s was critical to the eventual development of the electric guitar.

Additionally, the company continues to develop the modern single-note style of guitar playing.

In addition, today, virtually all electric guitars have an adjustable truss rod. What is more, most have adjustable height bridges. 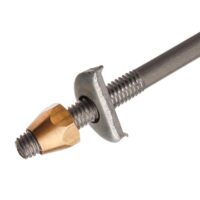 1922 – Gibson introduces the L-5 guitar. In fact, the L-5 is the first-ever archtop constructed with f-holes. Taking further cues from the violin, Also, Gibson pioneered the style still seen on most ES-style and archtop guitars today.

1935 – Gibson produces the first professional quality electric guitar, the ES-150. Furthermore, the company had experimented with various electric designs on lap steel guitars prior. As a matter of fact, the ES-150 created the electric guitar industry.

1948 – Gibson creates the first dual-pickup guitar when a treble pickup is added to the ES-300. Furthermore, having two pickups revolutionizes the industry by giving guitarists three distinct options for playing.

1949 – Gibson introduces the first guitar to feature three pickups, the ES-5. They are predating any other three pickups guitar. In addition, the ES-5 provided an unprecedented choice in tone. 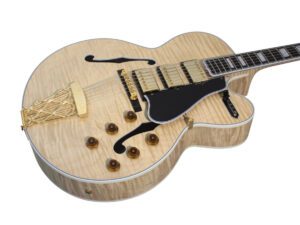 1952 – Gibson introduces the Les Paul guitar. Furthermore, the original solid body carved-top guitar is now synonymous with Gibson. Consequently, this legendry instrument has defined many genres of music and the sound of many prominent artists since its launch.

1957 – Gibson introduces the legendary Humbucking pickup. The pickup was first featured on the ES=175. This iconic pickup eliminates “hum” and interference from single-coil designs and creates a “fatter” sound. Furthermore, The revolutionary original and its descendant’s tones can be heard across all genres of music since its release.

1959 – Gibson introduced the “stereo varitone circuit. It offered players six additional preset tonal options. It also added the ability to run each pickup into a separate channel or amplifier.

Gibson SG1963 – Gibson introduces the Firebird guitar and Thunderbird bass. Challenging convention with neck-through construction and a treble-side horn longer than the bass horn. It is also known as the ‘reverse’ style.

1982 – Gibson introduced the first solid-body acoustic guitar, the Chet Atkins CE. It provides the sound of an acoustic combined with the comfort of a solid body electric. This model created a new genre of guitars.

1983 – Gibson introduced the Les Paul Studio. As a matter of fact, the Studio has become one of the best-selling Gibsons ever.

2002 – Gibson introduced the HD 6X-Pro Digital Guitar using technologies never before used in guitars. Furthermore, technologies like the audio-over-ethernet MaGIC system and new hex pickup. As a result, it allows unparalleled control over your sound via a direct computer interface.

2007 – Gibson introduced the “Robot Guitar.” This is the first-ever completely self-tuning guitar. Furthermore, the robot guitar allowed players access to seven unique tunings in seconds. This is done with a quick adjustment of the Master Control Knob.

2009 – Gibson introduced the ‘Dark Fire guitar.’ It incorporates the automatic tuning of the ‘Robot Guitar’ and the digital elements of the HD 6X Pro into a Les Paul Body. In consequence, it created the world’s most powerful digital-analog guitar. This technology combination would be used in the ‘Dusk Tiger’ and ‘Firebird X’ models in the following years.

In conclusion, Gibson continues to design and build the world’s most iconic guitars.

About the Author: Peter

The site administrator for Guitar Advice, Pete has been playing guitars since childhood. He's into both electrics and acoustic but now prefers electric. He plays guitars most days and enjoys doing it more than ever. Reading and writing about guitars is what he loves to do.